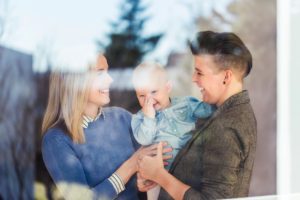 Amidst sweet engagements and mass wedding ceremonies, June 26, 2015, will also go down in the books for many gay and lesbian couples as the day their adoption plans became (closer to) reality. It may take some time for Michigan officials to formalize the specifics of Second-Parent Adoption. But for many same-sex couples, along with the right to marry, the Supreme Court ruling will extend the rights of gay and lesbian married couples to adopt each other’s children and to jointly adopt non-related children.

One of the reasons that Michigan’s DeBoer case was so appropriate for high-court debate was that it included not just their quest for the right to marry but their petition for the right to adopt each other’s children as well.

A Step Closer to Adoption Equality

“Some Michigan laws, such as those barring same-sex couples like DeBoer and Rowse from jointly adopting children, will have to be changed to reflect the Supreme Court ruling. The impact on children in gay families was repeatedly raised by Kennedy in his opinion. “Were tragedy to befall either DeBoer or Rowse, the other would have no legal rights over the children she had not been permitted to adopt. This couple seeks relief from the continuing uncertainty their unmarried status creates in their lives,” Kennedy wrote,” according to the Detroit News article, “Divided High Court legalizes same-sex marriage in U.S.” http://www.detroitnews.com/story/news/local/michigan/2015/06/26/scotus-samesex-marriage-adoption/29325617/

Prior to the Marriage Equality ruling, same-sex couples raising children together in Michigan were forced to developed complex legal agreements allowing both parents the right to make legal, educational, financial and medical decisions for the children. Although the comprehensive paperwork came close to giving both parents equal parenting rights and responsibilities, there were still shortcomings. For instance, what happens if the couple separates? What if the biological (or “first”) parent dies? For legally married couples who adopt, both parents will have full parental rights.

Going forward, Michigan will need to establish legal protocol for adoptions and may follow the precedents set by other states that have already figured out adoption procedures for same-sex couples.

For lesbian couples that conceive while in the same-sex relationship via insemination, the biological parent will need to provide proof of the anonymity of the donor or documentation that the known-donor relinquishes parental rights. The non-biological parent would need to submit to background checks and register fingerprints with the FBI. Both parents can work with an attorney who will help file the paperwork and guide them through the process. In some states, there is a required home study and interviews.

For a Michigan surrogacy arrangement, no money (other than medical payments) can change hands between parents and the surrogate. The surrogate must be a willing and capable adult. A surrogacy agreement allows the gestational parent to relinquish parental rights.

For homosexual couples, there are three paths of surrogacy and each has different steps in the same-sex, second-parent adoption process.

Joint adoption or fostering of an unrelated child

Currently, in Michigan, individuals and married couples are allowed to foster or adopt an unrelated child. With same-sex marriage legal here now, this should apply to same-sex couples as well. One potential impediment to this route for some couples is a recently enacted law that made it legal for adoption agencies to discriminate based on religious beliefs. For example, a Catholic agency could refuse to serve gay couples because homosexuality goes against church doctrine. Regardless of the state’s decision, private adoption attorneys can assist either birth parents, or adoptive parents through the process.

For many couples, while marriages licenses and rings were heartwarming, they’re just part of the joy that legal marriage brings to the same-sex couple.

“”It was more amazing than I thought it would be,” said Christina Leslie, 32, of Taylor, after marrying her longtime partner, Natalie Leslie, 32. Both women wiped away tears…For the Leslies, the next step will be getting Christina’s name added to the birth certificate for their 9-month-old daughter, Alice,” according to the Detroit Free Press Article, “Smiles and weddings rule the day in wake of same-sex ruling”

“For GLBT couples, the next year or two will be exciting and tumultuous in terms of legal rights in Michigan,” says Michigan family law attorney Kathryn Wayne-Spindler, “I am on top of recent developments and I look forward to helping couples grow into families through marriage and adoption.”