If nothing is certain but death and taxes, then the so-called “Death Tax” should be the gold standard for certainty.  But is it? Here’s the latest in estate tax developments.
The Estate Tax is defined as, “a tax on property (cash, real estate, stock, or other assets) transferred from deceased persons to their heirs,” according to a Center on Budget and Policy Priorities article, “Myths and Realities About the Estate Tax” written by Chye-Ching Huang and Nathaniel Frentz. 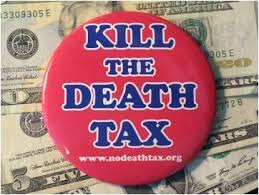 Effective January 1, 2013, the estate tax was made “permanent.”  However, that doesn’t mean change is out of the question.
“There’s no permanency in this town,” Jim Martin, head of 60 Plus Association, is quoted as saying in Ashlea Ebeling’s June 2013 article for Forbes, titled “Death Tax Repeal in 2017?”
Besides Martin’s advocating Estate Tax repeal, both Sen. John Thune and Rep. Kevin Brady co-sponsored The Death Tax Repeal Act of 2013. Its current status is listed as “Referred to the House Committee on Ways and Means.”

For 2014, the IRS excludes the first $5,340,000 in assets per person (or $10.68 million for a married couple) transferred after death.  That amount has risen from $1 million in 2010.  Under the current law, the maximum exclusion will continue to rise gradually as it is indexed to inflation.
The top statutory estate tax rate, set in January 2013, is currently 40 percent; although Huang and Frentz’s article indicates that the average effective tax rate applied to estates is 16.6 percent. This is primarily because the tax is progressive and only applied to the number of assets above and beyond the $5,340,000 exemption.

“Hillary Clinton, in her last campaign, supported making wealthier people pay more estate tax by capping the per person exemption at $3.5 million and setting the top rate at 45 percent, a policy Obama still supports,” wrote Richard Rubin in his June 17, 2014 Bloomberg article, “Wealthy Clintons Use Trusts to Limit Estate Tax They Back.” The article indicates that just 3,700 estates will owe estate taxes this year or 0.14 percent of those who die in the U.S. in 2014.

Prior to the January 2013 action, “If the government had done nothing, the top estate tax rate would have spiked to 55 percent on January 1 (2013), and the estate tax would have impacted all estates worth more than $1 million,” according to a January 23, 2013 Huffington Post article by Bonnie Kavoussi titled, “Rich Congressmen More Likely to Oppose Estate Tax, Study Finds.”

There have been proposals advocating the government setting a target amount to be generated and then applying variable exemption and tax rates to reach that target. Some suggest flat tax rates. There are those who would like to see the estate tax proceeds tied to a specific government program such as Social Security or children’s education funds instead of going toward reducing the deficit.

State Estate Taxes
The current trend is in states abolishing their separate estate taxes. In August 2014, New Jersey lawmakers are considering a repeal of the state’s inheritance tax. Although many states have their own estate taxes, some with drastically lower exclusions, Michigan does not. The Michigan Department of Treasury website reads, “Estates of persons who die after December 31, 2004 are not subject to a Michigan inheritance or estate tax. Therefore, no Estate Tax Forms need to be filed with the Michigan Department of Treasury.”

With the continuing dispute surrounding the future of the Federal Estate Tax, perhaps a more apt quote might be Heraclitus’s, “The only thing that is constant is change.”