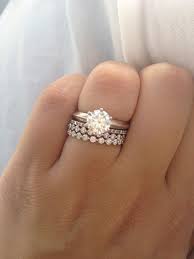 In Michigan, it is a well-documented understanding that post-divorce, the engagement ring, given in promise of marriage by a man to his future bride, belongs to the wife. No matter who caused the breakup. No matter how much the ring cost. Although some would try to argue that it should be a joint asset to be split evenly, the fact of the matter is that it was a conditional gift, given before the marriage. Once the marriage was complete, the condition was accomplished and the ring belongs to the giftee. The same goes for the wedding bands for both parties.

“[T]here can be an exception in the case of family heirlooms, which are subject to discussion because of their unique quality. Even in states where engagement rings are considered pre-marriage gifts, they may be returned to the husband’s family if they are family heirlooms,” wrote Natalie Gregg in her article, “Give Me My Ring Back! (Who Gets the Wedding Rings in a Divorce?”

But what about pre-wedding breakups? Who gets the ring if the condition of marriage is not completed? A 2001 Michigan case addresses that very circumstance.

“The definitive case on this issue is Meyer v Mitnick, 244 Mich App 697 (2001),” according to an article titled, “The Wedding’s Off–Now Who Keeps the Engagement Ring?” by Wendy S. Alton.

Meyer and Mitnick were engaged. Mitnick received an engagement ring. They subsequently broke off their engagement – each claiming the other caused the breakup. Mitnick refused to return the ring and Meyer sued her for it. The Oakland County Circuit Court ruled that the engagement ring should be returned to Meyer because it was a conditional gift and the condition – marriage – was not met. Mitnick claimed that Meyer caused the breakup so she should get to keep the ring and appealed to the Michigan Court of Appeals. Three judges, Fitzgerald, Holbrook, and McDonald heard the case and upheld the Circuit Courts’ ruling stating, “In sum, we hold that an engagement ring given in contemplation of marriage is an impliedly conditional gift that is a completed gift only upon marriage. If the engagement is called off, for whatever reason, the gift is not capable of becoming a completed gift and must be returned to the donor,”

According to the Meyer v Mitnick case, the fault is irrelevant.

The Meyer v Mitnick case answers the legal question.  But what if the couple parted ways on less litigious terms? The etiquette question is answered by noted expert Letitia Baldrige, who was quoted in the New York Times as saying, “the person who breaks the engagement is responsible for making good. “If the woman breaks it, she should send the ring back immediately,” Ms. Baldrige said. “If it is the man, he should say, ‘Of course you keep the ring.’ ”

Outside of the courtroom, couples sometimes determine ownership based on who caused the split and possibly even who paid for the ring. Although it’s traditional for the man to purchase the ring and give it as a gift to his future bride, some couples have different circumstances. In one instance, the woman was working while her fiance was finishing grad school. The woman loaned her future husband the money to purchase the ring. When the couple split, the woman kept the engagement ring as jewelry that she had essentially bought for herself.

So what to DO with the unwanted ring once ownership has been resolved?

Lee Borden, a divorce attorney in Alabama, wrote a humorous and informative blog on his website, divorceinfo.com, outlining the top options for disposing of unwanted wedding jewelry, including his favorite, mail it to him.

His first suggestion is to just keep it someplace safe and do nothing until you’re ready. “[Y]ou need to be careful to make sure you pick a truly safe place and make sure you backstop your memory (you’re in crisis, remember?) by writing down the location or sharing it with a trusted friend,” wrote Borden.

He also suggests saving it for children. Although, he says, daughters might be more sentimental about their parents’ jewels than sons.

Many websites suggest selling the ring to pay for divorce legal fees and the new expenses of a single life. The downfall is that many jewelry stores and pawn shops don’t offer much for used jewelry. “I Do Now I Don’t” website, idonowidont.com, buys and sells used engagement and wedding rings at a supposedly better deal than pawn shops and typical jewelry stores. Their website claims, “pawn shops can offer you just 10% for your unwanted jewelry.”

That said, one creative solution is to donate the ring to a favorite charity and take the tax write-off. The charity might have more credibility or connections and hence better luck getting a higher price. The charity also doesn’t have the emotional history with the ring that halts so many individuals from selling. Some people remember what the ring cost when originally purchased and are heartbroken to realize that it’s “worth” so little years later.

Dramatic exs might be looking for a more symbolic finale to the relationship. There is always the theatrical flair of impulsively throwing it off of a bridge like in the movies. With so many other more logical approaches, the benefits of this approach are hard to imagine. 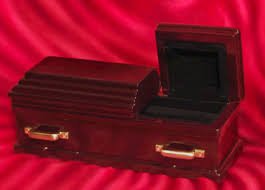 Equally dramatic, but less wasteful, is the ring casket. Want a symbol that tells the world, Hey, my relationship is dead? A website, weddingringcoffin.com, sells solid wood ring coffins for the low, low price of only $29.95. There is even the option of a split lid for final viewing. The website, reads, “Give a dead marriage its proper, final resting place. The Wedding Ring Coffin is the perfect gift for yourself or a loved one for bringing closure after a divorce. It’s time to…Bury the past and move on to a new tomorrow.”

Now, if only burying the hatchet was so easy.

Sources:
Traverse City Law, “Meyer v. Mitnick, 625 N.W.2d 136 (Mich. App. 2001) February 20, 2001 http://traversecityfamilylaw.com/Documents/Meyer_v_Mitnick.pdf
Avvo Legal Research, ” The Wedding’s Off – Now Who Keeps the Engagement Ring?” Wendy S. Alton, 2010. http://www.avvo.com/legal-guides/ugc/the-weddings-offnow-who-keeps-the-engagement-ring
Divorce 360, “His or Hers: Who Gets the Ring?”, Lenore Skomal. http://www.divorce360.com/divorce-articles/law/settlement/his-or-hers-who-gets-ring.aspx?artid=692
Divorceinfo.com. “What To Do With the Ring After Divorce,” Lee Borden http://www.divorceinfo.com/ringafterdivorce.htm
The Huffington Post, “Give Me My Ring Back! (Who Gets the Wedding Rings in a Divorce?), Natalie Gregg, Sept. 23, 2013. http://www.huffingtonpost.com/natalie-gregg/divorce-engagement-ring_b_3964186.html

Related Posts: Dividing assets, such as the marital home, can be complex, Property division during divorce may impact retirement plans, Being proactive is helpful when dealing with division of assets, After divorce, who pays for college?