Suspicion is on the smartphone, proof is on paper

There’s a significant difference between knowing that your spouse is cheating and proving it in court. Proving infidelity can have an impact on the outcome of your divorce. Although Michigan is a No-Fault divorce state, infidelity is considered during divorce proceedings.
“The division of property can be impacted by the proof of infidelity and/or abuse,” states Michigan family law attorney Kathryn Wayne-Spindler. 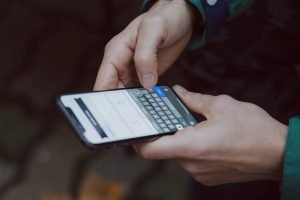 Judges strive for “equitable” division of marital assets when deciding how much each party gets in the divorce settlement. Equitable, in the case of divorce rulings, does not necessarily mean even. The word choice gives judges the leeway to consider extenuating factors in an effort to make the division “fair for both parties.” One extenuating factor is infidelity.

Although some judges believe that the marriage had to have already been broken for one partner to seek an affair, the number and length of adulterous relationships, the state of mind of the non-cheating partner and the possibility of emotional abuse, can still come into play.

“Judges start out at 50/50 division of assets,” explained Wayne-Spindler, “but in the case of serial infidelity or abuse, that split could swing as far as 60/40 in favor of the ‘victim.’”

So it is in the cheated-upon spouse’s best interests to prove that their mate committed adultery either with a physical act or emotional betrayal. But how to do so?

It starts with suspicion. Did you know that one survey showed that the number one giveaway of a cheating husband was unusual odors? Women, who have scientifically-proven better senses of smell than men, could not only detect obvious signs like perfume but could pick up on their man’s scent changing with different levels of testosterone and pheromones. On some occasions, women have reported noticing that their husbands’ clothes have smelled like a different fabric softener brand than they use just from spending time in the close company of another woman.

Another giveaway is unusual new behaviors. For example, if your spouse has extremely sensitive teeth and suddenly starts chewing gum obsessively, he could be trying to cover something up.
It goes without saying that if your spouse is threatening or abusive, it could be dangerous to investigate infidelity or confront your spouse on your own. Often, controlling or abusive husbands or wives can react violently if they fear that their submissive mate is turning away from them. See help from the police if you feel your mate would harm you if he/she found out that you are privy to infidelity.
If you are not comfortable doing the investigating, a divorce attorney will be able to recommend trusted private investigators.

Once you have established that it is safe for you to investigate the suspected infidelity, the starting place is social media sites like FaceBook, Twitter, Instagram and SnapChat. Modern technology and social media give the wronged spouse a powerful tool toward demonstrating an extra-marital relationship.
The paradox of technology is that even as more sites like SnapChat and Confide emerge to allow the users the illusion of ephemerality, there are equal numbers of new programs for spying and tracking. A MarketWatch article by Quentin Fottrell published Dec. 29, 2014 states, “Over 80 percent of U.S. divorce attorneys say they’ve seen a rise in the number of cases using social networking, according to the American Academy of Matrimonial Lawyers, and more than a third of divorce filings contained the word Facebook…”

Although most cheaters are smart enough not to use their real names when creating an alternate page or account, some will use part of their name and some other defining factor. You might have to dig a bit, but you can search profiles by high school or place of employment. Once you have that, you can confirm it’s your spouse by looking at the photos. Some people have luck with paid online spying programs like Spokeo or Flexispy that scan 70+ social media sites for defining factors you input.

Once you find your mate, start gathering evidence. Take screenshots and print them off. Email your results to a trusted friend. Check out locations visited, other webpages that he/she “likes,” friends’ pages, links, etc. PRINT EVERYTHING. If your spouse catches on and starts deleting or burying evidence, you need to have some proof in your hands. This is important because as Wayne-Spindler stressed, “FaceBook and others will not comply with either federal or state subpoenas for the content of a page or profile.” So you cannot count on the photos or messages you found to be there when it’s time for the trial and you cannot assume that your attorney will be able to retrieve the messages for you if they’ve been deleted.
It’s also helpful to get ahold of your spouse’s phone. If you take it to a carrier, like AT&T or Verizon, they can print off a full record of every text and call that was made or received as well as access all the photos and videos.

The MarketWatch article lists five legal apps that can be used for tracking spouses, children or employees. The caveat is that in order for the tracking to be legal, you must own the phone that is being tracked.
Credit cards and bank statements are another source of “proof.”

A judge may consider the money spent on a mistress when dividing assets. Although flowers and dinners may not make an appreciable impact, a condo or car might. If the purchases contributed to marital debt, that could affect the debt division as well. That’s why it’s important for a spouse to discover hidden accounts or secret credit cards.

The bottom line for proving infidelity in divorce court is proof. And even though technology may provide the source of the proof, without paper copies, it may be worthless if webpages are deleted or accounts are scuttled. Print everything.