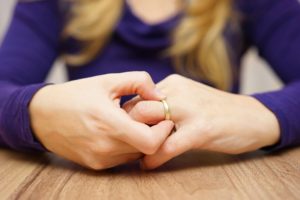 When infidelity in a marriage is uncovered, spouses understandably jump into a hyper-emotional mode that may include emotional pain, guilt, betrayal, mistrust, or defensiveness. For many couples the intense hurt for one and intense passion of the other, make the obstacles of maintaining a marriage seem insurmountable. Bolstered by friends and relatives, the cheated-upon spouse may dive into divorce in response to the pain of betrayal. He or she may be encouraged to believe that divorce is “what you do” after discovering a spouse cheated. For the cheater, the thrill of a dalliance may override appreciation for long-term bonds of marriage.

There are plenty of situations where divorce is the answer. For those whose marriages were already “done” and infidelity was the proverbial “straw that broke the camel’s back” divorce may be the answer. The same is true for the cheater who is seeking a divorce in order to marry the new love interest. But for couples seeking to avoid an impulsive divorce, a legal separation may be worth consideration. An attorney can help couples that want to obtain a Judgment for Separate Maintenance.

Separation Instead of Divorce

Filing for separate maintenance can be identical to divorce in terms of division of assets, child custody and visitation, and spousal support. The spouses live apart. Retirement accounts are split. The only difference is that with separation, the couple remains legally married.

In the case of impulsive divorce following infidelity, this could be a benefit. Legally, if the couple decides after a time apart to reconcile, a lawyer can have the Judgment for Separate Maintenance nullified and the spouses return to whatever marital arrangement they choose. If the separation turns out to be satisfactory, it can be a relatively simple process of turning a legal separation into a legal divorce, because the hard part of negotiating independent lives has already been accomplished.

Of course, voluntary time apart is also an option, but the benefit of making the separation legally recognized is that the terms are enforceable. For a spouse reeling from a partner’s betrayal, trust may be difficult. A legal document gives peace of mind that the other party is not hiding assets and must adhere to a child visitation schedule. Since both parties must agree to the separation, the cheater is basically saying no to divorce and therefore, the possibility of marrying someone else.

In the case of infidelity, the waiting period forces couples to cool-down after an affair is discovered. Unfortunately though, once some couples initiate the divorce process, it’s hard to change their minds and reconcile. For somewhere between four and ten percent of divorced couples, the regret over a hasty divorce eventually leads them to remarry an ex – earning them the label of Boomerang Couples.

For these couples, separation, whether legal or mutually-voluntary, would have given each of them a taste of divorced living with the safety net of the marital bond. The separation allows each party to experience the trials of living independently including co-parenting; managing two households on a budget that formerly sustained one; and rebuilding a social life.

For some people who discover their spouse cheating, they are stunned. They enjoyed the predictable, comfortable lifestyle of a married, two-parent family. Almost as painful as the betrayal is the expectation that the former family lifestyle is over. Sometimes well-meaning friends and relatives believe that a vengeful divorce will punish the cheater. It can end up punishing the cheated as well, by denying him or her the chance to forgive and rebuild a valued family relationship.

Separation gives the cheated a chance to have time and space away from everyday painful interactions while seeking counseling, grieving, healing, and re-evaluating priorities. If the cheater feels remorseful and apologetic and wants to reconcile, separation can be a satisfactory compromise for both parties while they both do the hard work of recovering their relationship.

For the cheaters, for whom an affair meant having cake and eating it too, separation is a wake-up call to what they will miss if the spouse seeks divorce. Previously, they may have enjoyed all the benefits of having a dependable household manager – someone to cook, clean, and buy Mother’s Day presents – and a passionate physical relationship on the side. Maybe that person was bored by married life and felt driven to cheat by a marriage-turned-loveless-partnership. Others may have been accustomed to a handsome bank account and a comfortable lifestyle but felt ignored by a professionally-successful absentee spouse. For these people, an affair meant someone to make them feel special and desired.

Whatever the reason for the infidelity, there was at least a part of the relationship that was working. Separation is a practical, realistic taste of life without their mate. With separation, they lose the supportive, dependable partner or the underappreciated financial support. With time apart, they may realize that the comforts of family life may be more important than the short-lived thrill of infidelity. With this realization, they may choose to do the hard work of rebuilding a broken marriage. A separation maintains a thread of connection on which to recover a relationship. That thread is almost always severed through the divorce process.

If reconciliation occurs after separation, an attorney can file a Stipulated Order asking the court to set aside the Judgment of Separate Maintenance.

Some spouses eventually reach the conclusion that separation suits them just fine. In that case, an attorney will help them file for divorce. “Usually, the terms of the Judgment for Separate Maintenance can carry over into the divorce judgment,” reports divorce attorney Wayne-Spindler. “For those that are pleased with the separation terms, this can streamline the divorce process.” For those who want to renegotiate, the presence of a legal Judgment of Separate Maintenance can complicate matters.

For those who separated without legal recognition of the split, they’ll have to start over to resolve separation issues before divorcing.

Obtaining a Judgment of Separate Maintenance is somewhat rare because it costs about the same as a divorce and requires much of the same legal action as a divorce. Both parties need to agree to a separation or evidence needs to be presented to a judge.
For those couples though, either bound by strong religious beliefs against divorce or those who are looking for the security of an enforceable contract without the finality of divorce, separation might be worth considering.