When deciding child custody arrangements, courts look seriously at any parental request to move children more than 100 “road traveled” miles away from the other parent. Change of Domicile requests can be some of the toughest legal battles during or after divorce. Courts use the reasoning that unless there are negative parenting factors, the children are best off with regular and consistent contact with both parents. It’s argued that driving more than 100 miles for visitation would cut off the other parent’s ability to participate in the children’s lives. That’s why the 100-mile rule is such an important child custody topic. 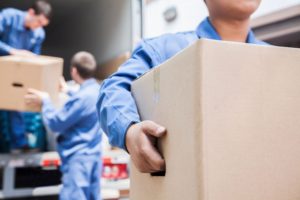 Statistics show that even inconsistent co-parenting is better for the kids than single-parenting. Obviously, this does not include exposing the kids to alcohol, drugs, or violence. Barring these damaging impacts though, the court’s first priority is keeping both parents involved if they want to be. That’s why the 100 Mile Rule is so strict. The 100 Mile Rule Law also applies to moves outside of the state or country because of the difficulty of enforcing Michigan’s custody laws in other jurisdictions.

The standard of 100 miles was selected somewhat arbitrarily but is intended to give divorcing couples the liberty to seek new jobs and start fresh, while still maintaining a convenient distance to maintain viable frequent visitation.

According to Traverse City lawyer John Tilley, prior to 2001 when the 100-Mile Rule was added by Michigan Legislature, the only restriction was on moving out of state. This created interesting complications because, “Michigan’s size and unusual two-peninsula shape resulted in the odd situation that a parent needed permission to move from, e.g., Menominee in the upper peninsula to Marinette Wisconsin, only blocks away, but none for the in-state move to Monroe, a 513 mile drive,” wrote Tilley in his blog “Changing Children’s Domicile: Oddities Within the Hundred Mile Rule.”

His article compares the unevenness of applying the 100-Mile Rule in the Lakes-heavy environment of Northern Michigan. What complicates the 100-mile standard here in Southeastern Michigan is the proximity to Canada, Ohio and Lakes Huron, St. Clair and Erie. 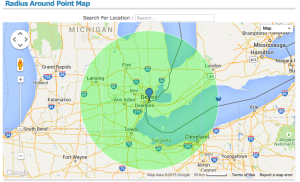 As seen in the attached map of the 100-mile radius around downtown Detroit, more than half of the allowed territory is eliminated by either being out-of-state or country or covered by water. Since the 100-Mile standard measures, the distance in “road traveled” miles, our winding roads and frequent lakes can make the range even smaller than the circle shown. For example, Milford to Midland is within range (94 miles) but Livonia to Midland is not (121 miles.) Change of Domicile requests give judges in Michigan the leeway to apply common sense exceptions to the 100-Mile Rule while still preserving co-parenting opportunities.

According to the Child Custody Act of 1970, Section 722.31, the courts need to consider the following questions when deciding Change of Domicile requests:

It is the requesting party’s burden to satisfy all of these standards. Quite often, the defendant is understandably concerned about his or her ability to see the children and will aggressively and persistently fight the Change of Domicile request. So, it is a relatively rare case that meets all of the requirements for a judge to grant the right to move outside the 100-Mile range. It is even more unusual to be granted the right to move outside the state or country.

That’s exactly the outcome that Randi Gagnon was looking for in 2010 when Family Law Attorney Kathryn Wayne-Spindler argued the petition for Gagnon to move her young son from Canton, MI to Windsor, Ontario, Canada. The precedent-setting case resulted in Gagnon being granted a Change of Domicile that held up in the Michigan Court of Appeals in 2012. Wayne-Spindler was able to demonstrate convincingly that the mother’s and child’s lives would be improved by access to the strong family support system and educational and employment opportunities for them in Canada. She also showed that with some adaptations to the visitation plan and transportation arrangements, that the father would have opportunities to continue his relationship with his son.

“It was a challenging and complicated case,” said Family Law Attorney Kathryn Wayne-Spindler, “but I am pleased that I was able to find a compromise that satisfied the court’s stringent rules while preserving the essential parenting needs of both parties.”