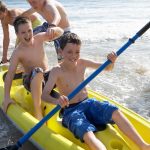 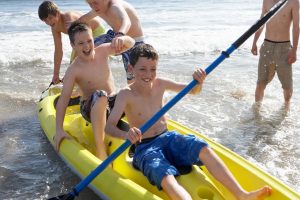 Memorial Weekend and high-school graduations mark the start of summertime in Michigan. For many working parents, not much changes with the new season other than the weather. But for many lucky kids, summertime in Michigan might mean camps and S’mores, hiking trips Up North, sleepovers and softball games. For divorced families, all these activities can bring scheduling conflicts, parenting time questions and summertime custody considerations.

“We handle a lot of parenting time conflicts at the start of summer because kids’ activities tend to be more spontaneous this time of the year,” says experienced South Lyon Child Custody Attorney Kathryn Wayne-Spindler. “When negotiating, I always remind parents to keep the kids’ best-interests in mind.”

When last-minute pool party invites occur during a parent’s weekend, he or she may feel resentful to be missing out on rightful parenting time. While it’s true that the custody agreements allow each parent to control the children’s schedule during his or her designated parenting time, it’s also true that the parenting time agreement was designed with the child’s best interests in mind.

The 12 Best Interest Factors used to determine custody and visitation are all about the physical, mental, social, moral, emotional, religious, and financial capability of each parent to provide for the child’s needs. When considering those factors, the courts may look at a parent’s willingness to accommodate reasonable parenting time adaptations for the sake of the child’s social and emotional well-being. Within reason, those needs may include the ability to maintain social connections by attending birthday parties and other gatherings. In the case of athletics and other extra-curriculars, it’s common knowledge that showing dedication may increase the child’s performance and standing. Say a young cross-country runner is invited to workout with Varsity on Saturday mornings. Although it’s not an official requirement, the child would obviously have a better shot at making the team in the fall if he shows up to invite-only summer runs. The parent with weekend custody may feel slighted and be tempted to refuse. But consider how the parent-child relationship might be impacted. Resentments may develop that strain the bond.

Although many of the solutions to parenting time quarrels may just seem like good common sense, sometimes rationality can take a back-seat to vengeance and discontent during contentious custody disputes. Here are a few reminders of possible compromises when parenting-time adaptations are requested:

In the best of times, parenting a teenager can be challenging. Divorce only aggravates many of the problems that families of teenagers already encounter. Many teens are naturally motivated to express themselves, make friendships, assert their independence and experiment with romance, social media, and alcohol. It’s hard enough to find an appropriate balance when both parents are on board with the same rules. When divorced parents disagree, it sends confusing signals to the teen who may grow to doubt both parents. The temptation can be to give the child all the freedom they want in an attempt to win them over. This could potentially backfire though as one of the best-interests factors concerns the ability of the parent to provide a stable environment with regular discipline and reasonable structure. If a 12-year-old with no curfew gets in trouble, it could call into question the parent’s commitment to appropriate parenting choices.

Wayne-Spindler suggests the parents’ seek common-ground. “Once a kid reaches 16, he or she pretty much runs the show anyway. So the parents might as well set differences aside and be a united front.”

Both parents should strive to demonstrate flexibility in negotiating the ever-changing family schedules that are a fact-of-life in our modern society.

When a parent gets snared in what he or she perceives to be unfairness, it can turn into a fight for “principle of the matter” instead of what’s right for the child in any given situation. Instead of digging in heels, try to keep in mind that the children may be feeling like their family situation is unfair. A child has no say in the parents’ choice to divorce. In many cases, the divorce may have required an unplanned move, change of school, reduced financial resources, and possibly accommodation of new family members. All of this was outside of the child’s control. The powerless that a parent feels when parenting time adjustments are requested is nothing compared to the powerlessness that a child felt when his parents’ divorced each other. When considering the big picture, giving up a Sunday afternoon is small potatoes.

Make the most of your time 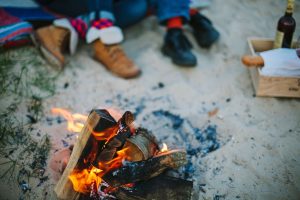 Many divorced parents just assume that their parenting time will be infringed as the child develops relationships outside the home. Embrace the teenager’s friendships. Be the social enabler. When a child asks to spend more time with friends, it’s a sign that both parents have done their jobs encouraging independence. If the kids are always asking to sleepover at friends’ houses, don’t be offended, they’re doing their jobs. Instead of being hurt, invite the friends to sleepover at your house. Take them all to the pool or the zoo. Teach them to make coffee-can ice cream, start a water-balloon fight or plant flowers.

Respect the other parent’s time with summertime custody considerations

One way to encourage mutual parental cooperation is to respect each other’s time. If a parent is always being asked to adapt, he or she is bound to become suspicious. If the primary custodial parent only asks for concessions when it is absolutely essential, the other parent may gain trust that his or her position is valued. “Often, I advise clients that when they are asking for a parenting time alteration, they propose a reasonable trade-off. That way there’s no temptation to view it as intentional alienation,” says Wayne-Spindler.

Summertime can be joyous and memorable for all family members when common sense is applied to parenting time decisions. If disagreements are plaguing your family time, consult South Lyon Custody Attorney Kathryn Wayne-Spindler. She is experienced with petitions for post-judgment modifications as well as mediation. She can also recommend a co-parenting class to teach parents how to avoid many common divorce communication pitfalls. Contact the Milford, Michigan divorce and custody law firm of Kathryn Wayne-Spindler & Associates at 248-676-1000 for a free consultation.