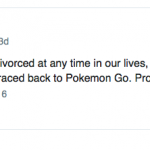 Pokemon Go gets people out of the house. It brings people together. The game encourages exercise. It’s good, clean, healthy entertainment…until it’s not. As the old saying goes, it’s all fun and games until someone chooses to spend time with imaginary creatures rather than a spouse. Which is apparently what’s happening in the world. In the grand tradition of football and hunting, Pokemon Widowhood is becoming a phenomenon.

What may start as a hobby, for some people creeps past obsession to out-and-out addiction. As with other highly-addictive habits, Pokemon Go gives instant gratification, an opportunity for escape from reality, and tantalizing thrill. Whether it’s alcohol or video games, once an addiction takes hold, reason and sensibility sometimes take a back seat to getting a fix. It’s triply-difficult to curb the Pokemon craze because:

Unlike hardcore drugs, Pokemon Go is legal, publically celebrated and generally harmless. So how can something as benign as a children’s game be bad for you? Ask a Gambling Addict. Poker is “just a game” too. And people play it in public and on television, but many lose houses, life-savings, jobs and spouses to gambling addictions.

On any given afternoon on any given sidewalk we see at least one distracted human wandering in a wavering manner as if divining for water. Since someone is always playing, those with an obsession might imagine that everyone’s always playing so they should be too.

First there’s the modern-day hunting and gathering instinct to collect and possess a complete set. It’s why items like Beanie Babies, Shopkins, Nascar plates and State Quarters have such a strong appeal. The genius of Pokemon Go is that just as a player “levels up” and starts to feel closer to the finish line, new rare creatures are added increasing the temptation to play just a little longer. Pokemon Go is also the ultimate excuse for escapism. Whereas a teenage boy might get guff for spending too much sofa time playing Xbox, he is praised for walking the dog. Nobody’s going to question the woman who suddenly decides she likes bike riding. In moderation, Pokemon Go is fun and rewarding. In obsession, it leads that teenage boy to walk the dog instead of studying for finals or that bike-riding woman to ignore her children.

If dubious about the potential draw of the game, a recent Milford, Michigan case illustrates just how intense a distraction it can be. A 26-year-old man with multiple arrest warrants was playing Pokemon Go and unknowingly tried to visit a Pokemon gym which happens to be located in the Milford Police department. Officers recognized him and arrested him. “The ridiculousness of the incident wasn’t lost on [Police Chief Tom] Lindberg, who further stated that he would have never thought that ‘someone with a warrant would be so driven by the game that they’d walk right up to the police station.’”

So how to know when a Pokemon Go hobby has become addiction?

The traditional survey to self-diagnose alcoholism is called C.A.G.E.  “Most self-test questionnaires apply to alcohol addiction, but can be easily adapted to any addiction.

Some psychologists also consider the Alcoholism Audit including questions like:

Crucial questions in terms of marriage and relationships are, “Does the obsession interfere with normal, healthy interpersonal interactions?”

If Pokemon Go is damaging your relationship, you’re not alone. Huffiest and Buzzfeed recently ran blogs of funny tweets by folks who’ve had Pokemon come between them.

“I don’t know of anyone specifically getting divorced over Pokemon Go,” said South Lyon Divorce Attorney Kathryn Wayne-Spindler, “but couples breaking up because of obsessions is nothing new.”