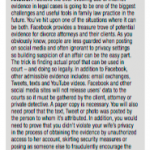 Kathryn Wayne-Spindler recently responded to a question regarding the impact of social media evidence on family law cases in the Oakland County SpinalColumn Newsweekly.

Q: My wife and I are in the process of divorcing. I was checking her Facebook page the other day and noticed a one-year “anniversary” photo post of her at a restaurant with a man’s arm around her shoulders. The status read, “NOW I’ve had the time of my life.” I know that proving infidelity can impact the divorce settlement so I am starting to search for other evidence of an affair. I want to know what social media evidence is allowed in court and what proof I need.

A: I believe the ever-evolving use of Internet evidence in legal cases is going to be one of the biggest challenges and useful tools in family law practice in the future. You’ve hit upon one of the situations where it can be both. Facebook provides a treasure trove of potential evidence for divorce attorneys and their clients. As you obviously know, people are less guarded when posting on social media and often ignorant to privacy settings so building suspicion of an affair can be the easy part. The trick is finding actual proof that can be used in court – and doing so legally. In addition to Facebook, other admissible evidence includes: email exchanges, Tweets, texts and YouTube videos. Facebook and other social media sites will not release users’ data to the courts so it must be gathered by the client, attorney or private detective. A paper copy is necessary. You will also need proof that the text, Tweet or photo was posted by the person to whom it’s attributed. In addition, you would need to prove that you didn’t violate your wife’s privacy in the process of obtaining the social media evidence by unauthorized access to her account, skirting security measures or posing as someone else to fraudulently encourage the sharing of private information. Be aware that the opposing counsel will try hard to show that the online evidence was tampered-with or that you violated her privacy. Also be cautious that unskilled snooping may alert a spouse to your investigation and cause her to delete other evidence. If there is any history of domestic violence, I advise hiring a professional because sometimes an unfaithful spouse can be enraged by his or her partner’s suspicion.