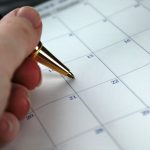 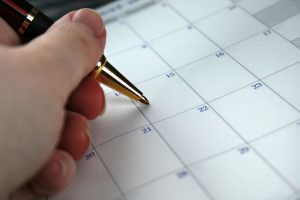 Marking down a date on the calendar

While kids are counting down the number of school days left before summer, some parents are counting the days for another reason – filing for divorce.

When you think about it, there are at least three good reasons that June is a good time to file for divorce.

1 – Kids have the summer to adjust
Some parents have been waiting until school finishes to file for divorce and tell the kids. Some people don’t have a choice because of finances or abuse but those who do may find the transition to be smoother by waiting until the kids are out of school. For one, the kids’ stress levels are already lower during summertime – no homework, tests, waking up early, etc. Also, their social connections are on hiatus. They may still call or text friends but they have the freedom to decide when they are up for interaction. Waiting for summer also avoids the inconvenience of filing new school emergency contact forms and letting teachers know the kids’ altered custody arrangements. Some kids benefit from therapy during a divorce and it can be easier to fit these appointments into a summer schedule. This is also the time when working parents are making summer camp arrangements. Those with graduating seniors may feel they have fulfilled their parenting responsibilities. They enjoy the celebrations as a family and then embark on a new separate single life.

2 – Selling the house
Many people sell their family home during divorce. Some need the money for two residences. Others may want a fresh start elsewhere. No matter the reason, early summer is a good time for real estate buying and selling. There is heavy buyer traffic in May and June. With a quick offer, the deal could close by late-summer giving each party time to get settled before the next school year begins.

3 – Finalized by end of calendar year
With an uncomplicated, non-contentious divorce, filing in May or June may mean the divorce could by finalized by the end of the calendar year. Although there is a six-month waiting period in Michigan for any divorce involving minor children, those filing in May or early June could still potentially get it in under the wire. For some people, this is beneficial for tax reasons. Obviously, if the divorce involves litigation or a child custody battle, it would take longer.

“People are surprised to hear that divorce work is cyclical,” says busy Holly Divorce Attorney Kathryn Wayne-Spindler. “The end of the school year and beginning of the calendar year are especially busy for initiating divorce cases.”

If you’re thinking of divorce, there are a few items to get in order.