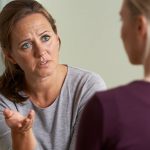 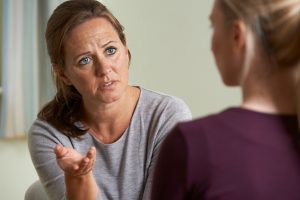 The taboo topic of sexual assault has gotten media attention this election cycle. Regardless of how you feel about either candidate, it’s already been a rough road to Nov. 8. The glass-half-full perspective of this awful election season is that, if nothing else, emotional abuse victims are finding a voice to combat all the of sexist, controlling and demeaning stuff that is usually quietly endured at the hands of husbands, wives, co-workers, bosses and yes, even presidential candidates.

Divorce attorneys and therapists hear that phrase all the time. It’s a hold-over from a time when physical abuse was the only kind that held weight in court. Nowadays, judges recognize that verbal, sexual and emotional abuse can be just a damaging – and can be viable grounds for influencing the outcome of a divorce settlement or child custody dispute. The broadened view of abuse has also opened the door for far more abuse claims from men in recent decades.

“Many of my clients, both men and women, have been able to come forward to get help getting out of abusive relationships thanks to the Power and Control Wheel,” said experienced Hartland, Michigan Divorce Attorney Kathryn Wayne-Spindler. Victims of emotional and sexual assault are so programmed to feel powerless that they may not acknowledge that what the spouse is doing constitutes abuse. The victim may be reluctant to come forward because he/she is afraid of the abuser’s reaction. Victims may also stay quiet because they are worried that others will think they are just being oversensitive.

The threshold is obviously different for everyone. There is no cut-and-dry gold standard behavior that has everyone nodding along in agreement. It’s important in relationships that both partners have a sense of equality. A power imbalance could indicate possible abuse. Because the perception of emotional abuse is so subjective, therapists utilize the Power and Control Wheel as a diagnostic tool. 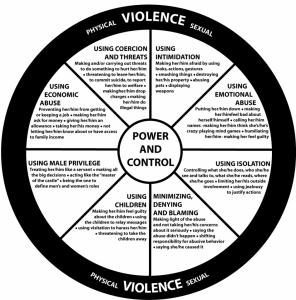 The wheel suggests possible abusive behaviors aligned in categories: Using Coercion and Threats; Using Intimidation; Using Emotional Abuse; Using Isolation; Minimizing, denying and Blaming; Using Children; Using Male Privilege; and Using Economic Abuse. Using the wheel’s prompts, the victim recounts his/her similar experiences. A therapist can then help determine if, and how severely, the spouse has suffered abuse. The wheel is useful because it allows introspection regarding the balance of power in a relationship. Rather than looking at the partner’s behaviors intrinsically, the wheel helps measure the victim’s feelings and reactions to those behaviors.

For instance, some couples yell. The shouting bounces right off. Each responds in kind and leaves the argument none the worse for wear. In unbalanced relationships, the victim may cry in a closet whenever the partner raises his/her voice. Meanwhile, the very same person that stood up to a spouse during a shouting match, may feel worthless when he suggests that she is fat.

The reason the wheel works so well is that it shows the entire spectrum of relationship interactions – emotional, verbal, sexual and physical. It’s rare that spouses feel exactly equivalent across all aspects of married life. Each has individual preferences and tolerances. As long as each spouse appreciates and recognizes the other’s contributions, all is balanced. There are some categories that are gender specific. But for the most part, it can be used for either men or women.

Physical abuse has visual evidence in the form of bruises and cuts. There are also frequently police reports and witnesses to physical abuse. Granted, it can be more difficult to prove emotional or verbal abuse. But it’s not impossible.

Keep a journal. Document not just the aggressor’s actions but your response as well. Try to write down who else may have witnessed the exchange. Witnesses cannot testify about your feelings. They may be able to tell the court your reactions. As an example, if he gropes you in public and you feel demeaned, you may cry or seek out a friend. A witness could testify that he or she saw you weeping.

A therapist can help demonstrate a pattern of abuse. Using the Power and Control Wheel as stimulus, the therapist may gather evidence of unwanted sexual advances or abusive language. The therapist may be called into court to testify.