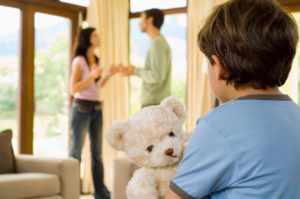 News coverage of the highly-publicized case of three Detroit-area children sent to Children’s Home after refusing to have lunch with their estranged father quieted when the children went to camp. But the intense controversy surrounding the case highlights the issue of Parental Alienation.

“Parental alienation is a very real and very serious problem in highly-contentious co-parenting situations,” Michigan Family Law Attorney Kathryn Wayne-Spindler pointed out, “anytime one parent speaks ill of or encourages the children to avoid the other parent it influences all the relationships negatively.”

In most situations, parental alienation begins with snide remarks or underhanded accusations meant to be overheard by the kids. A parent might also intentionally complicate the visitation schedule. Supposedly, in the best interests of the children. It might start out with one parent scheduling an orthodontist appointment during the other parent’s weekend. Some parents think they are being subtle with their cell phone rants and Facebook posts about their ex-spouse, but kids are observant. When the negative comments, true or false, encourage the kids to avoid the other parent, it’s Parental Alienation Syndrome. According to Psychology Today, “Parental alienation involves the “programming” of a child by one parent to denigrate the other “targeted” parent, in an effort to undermine and interfere with the child’s relationship with that parent, and is often a sign of a parent’s inability to separate from the couple conflict and focus on the needs of the child.”

“The children’s parents, Maya Eibschitz-Tsimhoni and Omer Tsimhoni, divorced five years ago and have been battling in court ever since over parenting time,” according to the Detroit Free Press article, “Judge releases ‘jailed’ kids, sends them to summer camp.”

The three children were supposed to have time with both parents. Over the course of several court appearances, Oakland County Family Court Judge Lisa Gorcyca encouraged the children to have a healthy relationship with their father. Eventually, it became clear that the mother was attempting to alienate the children from their father by poisoning their opinion of him.

During a June 24 hearing, Judge Gorcyca ordered the children to have lunch with their father. When they refused, she held them in contempt and sent them to the center in Waterford Township called Children’s Village, where authorities house as many as 200 juvenile offenders. The children stayed in a portion of the facility with non-criminal residents for a couple of weeks before the father petitioned the court to allow the children to go to summer camp instead.

Although the situation for the kids is temporarily settled, the questions regarding Judge Gorcyca’s contempt ruling continue to swirl.

“This is a fantastic judge with a great reputation so this must have been very serious,” commented Wayne-Spindler.

Gorcyca defended her actions as the case drew national attention, saying, “While this court’s remedy in this particular situation may seem drastic and offensive, so too, is the notion … that the only way to maintain a stable and loving connection with the mother is to vilify and reject the father.”

Most parents attempting to alienate their children from an ex-spouse believe they are getting back at their former partner. But it’s the children that experience the long-lasting impacts of Parental Alienation. Therapists tell of children with trust issues. One parental-child relationship is damaged by suspicion of wrongdoing. But the other is damaged by the children’s awareness that a parent is manipulating them – not out of a sense of love and protection – but vengeance.

If a parent is suspicious of wrongdoing or harmful behavior it should be addressed in the courts. As demonstrated by Judge Gorcyca’s actions, the courts take Parental Alienation situations seriously because of the damaging impacts on the kids. Once a judge has ruled that some form of joint parenting is in the children’s best interests, parents are expected to respect the court’s decision. It can be difficult to let go of the pain and betrayal of a failed marriage. But, for the sake of the kids, psychologists recommend therapy, family counseling, parenting classes or additional mediation or legal action rather than trying to turn the children against their father or mother.